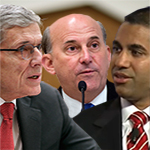 The House Judiciary Committee telegraphed its punches by titling the hearing they held last Wednesday, featuring Chairman Wheeler and Commissioner Pai, “Wrecking the Internet to Save It?” Wheeler was once again on the defense, saying, “This issue is simply about whether those who operate networks will be the rule-makers, or whether consumers and innovators will have the security of knowing that the network operators will not be able to misuse their positions.” Commissioner Pai represented the loyal opposition, saying, “This is a heavy-handed solution that won’t work for a problem that doesn’t exist.” Committee Member Louie Gohmert (R-TX) contributed, “Before the FCC came in, everybody could explore new business models. You’re playing God with the Internet.”

← Summer Promotions
Apple in hot water with the Feds. →