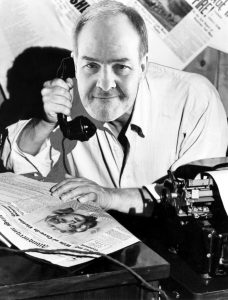 This past week we experienced another troubling assault on the freedom of the press in general, but more specifically, the ability for each of us to operate a licensed business honestly and ethically without fear of capricious reprisal.

I am talking, of course, about the president’s remark about taking away the license of NBC because of what he alleges to be “fake news.” We all know that NBC does not have or need a license—but we do.

This is not a debate about whether any news medium has been guilty of “fake news.” There is no question about the fact that all the online resources that have cropped up—most of which are operated by people with dubious journalistic standards—have severely damaged the reputation of journalism in general. Adding fuel to the fire is the emphatically not fake news that foreign interests have been actively engaged in generating fake news for years.
So we know that fake news is a thing. But in this bizarro world we live in today, the real fake news is being touted as responsible reporting, and responsible reporting is being branded as fake news.

While nobody is getting it right 100% of the time—especially since these days there are almost no reliable sources—if anybody is at least trying to get it right, it is the major radio and television networks—and to give credit where it’s due, the major newspapers as well. The people who work for these outfits have probably gone to journalism school, and have certainly knocked around newsrooms, learning the ropes. They know the importance of checking facts and verifying sources.

And I really believe our local radio operations are trying hard to get it right, too. Since we share coffee and Rotary and committee meetings with our listeners and advertisers every day, we can’t afford to get it wrong.

But the way things are going, I’m very afraid of a damaging chain reaction. If our president happens to hear something that he doesn’t like, he could very well apply pressure on his FCC chairman to apply pressure to the offender. They’d find it hard to take away our license, but they sure could make our lives a living hell.

Make no mistake about it, news media are under assault as never before in our lifetimes. But there are some things we can do about. For starters—and I know I’m going to get emails about this—subscribe to a major newspaper. Whether we like it, these guys are doing most of the investigative journalism that is keeping the world at least a little bit on the rails.

The second thing you can do, far more importantly, is support the National Association of Broadcasters and the Radio Television Digital News Association in their efforts to resist the compromise of journalistic integrity. If you’re not a member of the NAB, there’s no better time to sign up.

The NAB will be the first to acknowledge this: the strength of their lobbying efforts and our ability to advance our cause rests squarely with the relationships that you and I have with the elected officials from our area. I don’t know too many small-market radio stations that don’t have strong and good relations with the folks we send to the statehouse and to Congress, and it’s vital that you reach out to these guys and make sure they understand what’s at stake.

One of the aforementioned major newspapers has as its slogan, “Democracy Dies in Darkness.” It’s a fantastic tagline—I wish I’d written it—and it’s absolutely the perfect sentiment for our times.

“Democracy dies in darkness.” Let that serve as a rallying cry for all of us, to fight with all we’ve got to protect the First Amendment and the Fourth Estate.