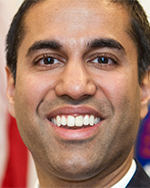 The Senate has voted to confirm Ajit Pai as chairman of the FCC for another five years in a party-line vote, 52-41. (The Dems voted Nay because of Pai’s stance against Net Neutrality and his deregulation efforts.) Pai responded by saying he was “deeply grateful” to the Senate and to the president. On behalf of our industry, NAB president/CEO Gordon Smith commented, “NAB congratulates FCC chairman Pai on being confirmed…” Smith observed that the chairman “understands broadcasting’s unique role as an indispensable communications medium, and we appreciate his effort to ease outdated regulatory burdens on local radio and TV.”