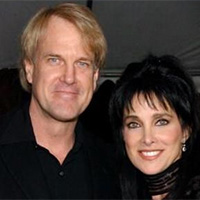 The Hissy-Fit of the Week Award goes to musician and syndicated radio host John Tesh, who returned his Radio Hall Of Fame Award because of an incident on stage during the ceremonies involving his wife, actor Connie Sellecca. Apparently Ms. Sellecca completely disregarded the three-minute limit when she was introducing Mister Tesh, despite the requisite orchestral cue, and the producers ultimately had to cut her mic and turn out the lights.