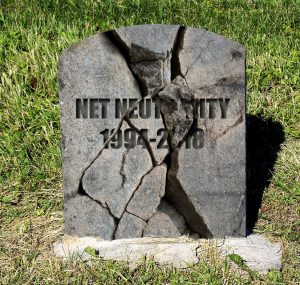 I just read your opinion on Net Neutrality; I agree. I am very conservative but the Net is a common carrier, just a different technology from hard-wired cable. Interesting—the Senate voted to overturn the FCC ; there is hope yet.
—Randy Johnston, Music America

The Senate is one thing; the House is another thing, but what happens if the repeal passes both chambers and lands on the president’s desk? If it comes down to an Oval Office John Hancock, the odds are not in our favor, despite overwhelming support .

More than 80% of voters oppose the Federal Communications Commission’s plan to repeal its net neutrality rules, according to a new poll from the University of Maryland’s Program for Public Consultation.

The survey presented respondents with detailed arguments from both supporters and opponents of the repeal plan, before asking them where they stood on the rules. It found that 83% overall favored keeping the FCC rules, including 75% of Republicans, 89% of Democrats and 86% of independents.

“A decision to repeal net neutrality would be tacking against strong headwinds of public opinion blowing in the opposite direction,” Steven Kull, the director of the university program, said in a statement.

The school said that its questionnaire had been vetted for accuracy by experts on both sides of the debate.

Since the fight is now in the House, I urge you to contact the U.S. representatives from your area and have a real conversation. The elephant-in-the-room question: “Since we have a representative form of government, will your vote reflect the thinking of your constituents?”

I can’t wait to hear the answers.