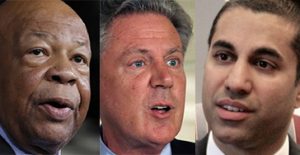 The FCC has made several decisions that benefit Sinclair, a broadcast station owner with a right-wing tilt. Among other things, the FCC rolled back broadcast TV station ownership limits, which could help Sinclair complete an acquisition of Tribune Media Company and, in the process, reach 72 percent of TV-owning households in the US.