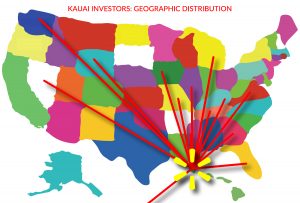 In what may be the most impressive group of broadcasters to ever join forces to buy a radio station, Kauai Broadcast Partners LLC has filed an application with the Federal Communications Communion to buy KZZV(FM) in Hanapepe, Hawai’i, on the island of Kaua’i.

Kauai Broadcast Partners LLC is the brainchild of Larry Fuss, who, in 1999, built a radio station (KKHJ-FM) in Pago Pago, American Samoa. According to Fuss, “At the time, it was widely thought I was crazy.  Building a radio station on a small, isolated island 8000 miles from my home base seemed like an insane idea to many.  But, it has been immensely successful and now, 18 years later, has grown to a two-station cluster, plus a cable TV channel and an LPTV. When the opportunity to buy a station in Hawai’i came along, I reached out to a bunch of friends and everybody agreed that owning a radio station in Hawai’i would be a fun project. As a result, Kauai Broadcast Partners LLC was born.”

In addition to Fuss, partners in the new venture include these broadcasters:

According to Fuss, “We have an incredible brain trust assembled, all of whom will contribute to the success of the station.”  Fuss said the current call letters will be changed, but that a new format has not yet been decided on.  The station, which formerly aired a religious format, has been off-air since August.  Fuss said he hopes to commence operation by Summer 2018.  According to Fuss, “The biggest challenge so far has been listing the broadcast interests of all the partners on the FCC transfer application.”

In addition to Fuss’s broadcast interests in American Samoa and Mississippi, he also serves on the Board of Directors of the National Association of Broadcasters (NAB), representing American Samoa, Hawai’i, Guam, the Northern Marianas, and Southern California.