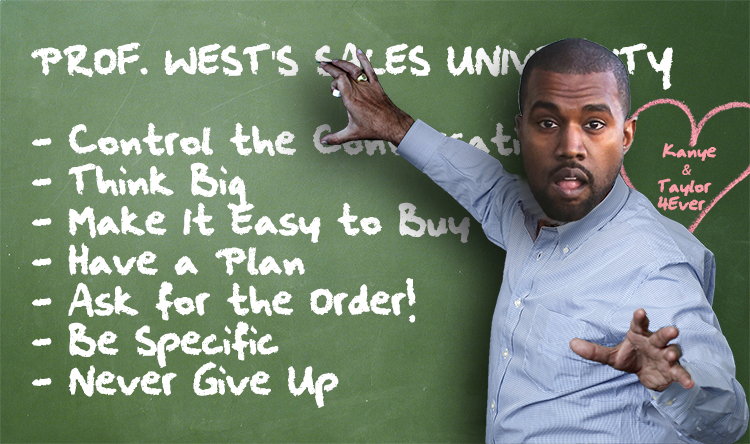 CONTROL THE CONVERSATION. To be effective, the salesperson must gently and diplomatically guide the conversation with the prospect to keep things on track and pointing in the direction of the close (a.k.a., asking for the order). 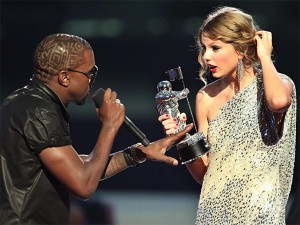 Mr. West is no stranger to the concept: without a doubt, the most infamous example of him guiding the conversation—whether it was gently and diplomatically is another story—was his stunt at the 2009 MTV Video Music Awards; let’s let MTV.com set the scene:

The rapper stormed the stage just after the first award, for Best Female Video, was presented to Taylor Swift. He cut the teen singer off, grabbing the mic and protesting in support of Beyoncé. “I’m sorry, but Beyoncé had one of the best videos of all time,” he proclaimed as B looked on from the crowd, stunned.

THINK BIG. A good salesperson understands the value of what he or she is presenting—the value not only of the product or service, but of the salesperson him- or herself. And Mr. West exemplifies this lesson well: he is nothing if not ambitious in his thinking.

For one thing, he seems not to have a self-esteem problem, as evidenced by such public statements as, “I am this generation’s Disney.” That kind of self-confidence—albeit perhaps not as delusional—is an important requisite to being an effective salesperson.

MAKE IT EASY FOR THE CLIENT TO BUY. Unfortunately, Mr. West did not learn this particular sales lesson: he chose Facebook’s arch rival Twitter as the medium through which to make his pitch to Mr. Zuckerberg. (Calls to Mr. Zuckerberg have gone unreturned—both to this newsletter and to Mr. West.)

HAVE A PLAN. Mr. West is savvy enough to realize that if he is going to ask for big dollars, he needs to present a solid plan for the use of those dollars. Enter DONDA, which, according to The Daily Beast, is “a comprehensive network of businesses investing in everything from medical research to find a cure for HIV and cancer, to holograms and hovercrafts, to matchmaking and ‘emoticon auto correct.'”

ASK FOR THE ORDER. It is all too common for salespeople to make wonderful presentations, but then fail to ask for the order. In that case, by omitting that very simple step, they have turned a sales call into a conversation—a conversation in which nothing gets accomplished. 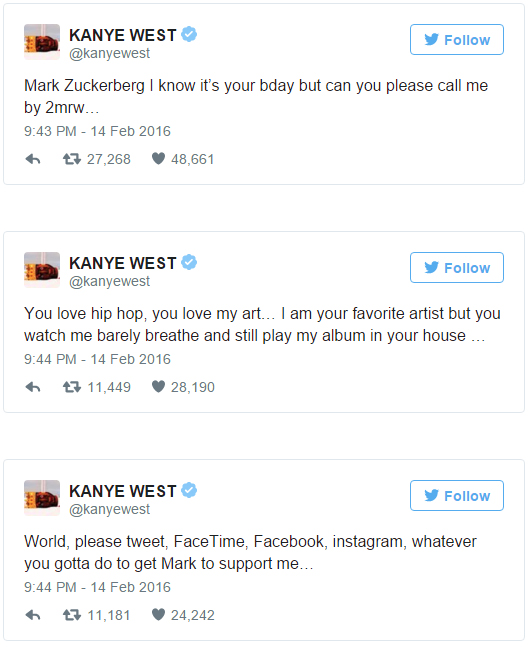 To the right is a series of Tweets that demonstrate Mr. West’s ability to keep asking.

BE SPECIFIC. To Mr. West’s credit, he had a certain sum in mind, and presented it unabashedly. How can a salesperson expect the prospect to buy when the terms are vague or nonexistent?

In Mr. West’s case, he not only presented his ambitious plan clearly (well, at least definitively), but he specifically asked his prospect for the order—and rallied his fans to encourage said prospect to buy. (We’re scratching our heads about the “wave power” energy source—unless he plans to harness the kilowattage of the time-honored ball game ritual.)

NEVER GIVE UP. Mr. West actually debuted his DONDA concept over four years ago, when it was met with tepid response, to say the least. (At that point in time, his chief prospect was Eric Schmidt, then CEO of Google.) Undeterred, Mr. West has kept his dream alive over the years, presenting it to various and sundry moneyed moguls.

THE TAKE-AWAY. Fortunately, you don’t have to be as erratic (nor, for that matter, as talented) as Mr. West to be an effective salesperson. In addition to the lessons we have learned from the artist, it’s important that you be memorable in a positive way. Not only do you want to be valued for your expertise and genuine concern for the client—traits that seem not to be exhibited by Mr. West, by the way—but you want to be a welcome part of the prospect’s day, not an interruption easily avoided.
—Editor