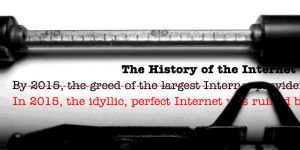 Well, despite the best efforts of a lot of people to compel Congress to overturn the FCC ruling on Net Neutrality, the big communications companies will get their way on June 11.

AT&T and Comcast have been very up front about their intentions to create a multilevel fee structure—call it a “friends and family plan,” but the friends and family are those of the providers, not the customers. (The other wireless providers are less obvious about it, but you can be sure that they have plans in place that mirror what the aforementioned companies are doing.)

I find interesting Ajit Pai’s interpretation of the history of Internet regulation. To quote from his statement, “The Internet wasn’t broken in 2015, when the prior FCC buckled to political pressure and imposed heavy-handed Title II rules on the Internet economy.”

I offer another interpretation: In the freewheeling days of the first Internet boom during the Clinton Administration, the growth and consolidation of power in the broadband industry had yet to occur. What you had in those days was a bunch of small players yearning to be big. The Internet was a de facto level and open playing field, and nobody thought there was any need for regulation.

Fast-forward to 2015. The little guys were bought, merged, and combined into big guys, and Internet traffic was controlled by a small number of big players. The threat to Internet equality was recognized, and the FCC took appropriate action.

As I have said time and time again, I believe firmly in the concept of laissez-faire, where government applies the lightest of touches to business, and business has the responsibility and the ethical outlook to regulate itself. Unfortunately, that’s not the way things work in today’s world, especially in an era where world leaders put their own selfish desires above those of the people they govern.

As I have also said time and time again, the repeal of Net Neutrality is going to hurt you and me and our customers. The Internet is the gateway for radio to take its place at the digital table, where we can enjoy the ability to move to where our listeners are—smart speakers, connected dashes, smartphone apps, and so on. The rate hikes and preferential treatment that are sure to ensue will make it that much harder for us to embrace fully the opportunities that lie before us. On the other side of the equation, they will make Internet usage more expensive and limited for the very audience we are trying to serve.

Radio broadcasters are by nature a conservative lot, advocating a general lack of regulation, mostly because of what unnecessary and burdensome regulation has cost us in our own businesses. But in the case of Internet access, every single one of you who has written me agrees that, at least in this situation, regulation is necessary to protect our ability to do business and to protect the freedom that equal access provides to our customers.

Nothing is forever, and what has been done can be undone—just as Net Neutrality was undone, it can be reinstated. The fight isn’t over if we say it’s not over, and if we continue to apply pressure to our Congress people to make sure the issue stays top-of-mind. That top-of-mind awareness is important when it comes to confirming future FCC Commissioners. And it’s important should the opportunity arise for Congress once again to take up the matter of compelling the Commission to re-examine the issue.

We are fighting a lot of battles nowadays, but it would be a grave mistake not to number Net Neutrality among them; it’s a battle worth winning to preserve our ability to survive, thrive, connect and compete in the new-media world.