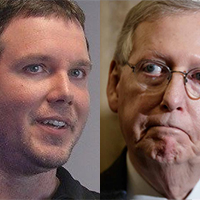 This story has been corrected.

The Federal Election Commission, acting on a complaint from the Republican Party of Kentucky, has ruled that Kentucky Sports Radio host Matt Jones must step away from his broadcasting duties while running for Senate in a primary which, if he wins, would pit him against longtime Senator and Majority Leader Mitch McConnell. Also at issue in the Republican complaint is a book deal with Simon & Schuster; both the show and the book, according to the Republicans, constitute illegal contributions to his campaign.