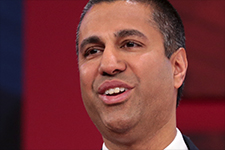 The 2018 quadrennial review of broadcast ownership rules has begun (Media Bureau Docket Number 18-349). In a blog post at fcc.gov, Chairman Ajit Pai’s wrote that the review would start with a Notice of Proposed Rulemaking which would include the ownership rules and “several diversity -related proposals.” Mr. Pai also hinted that he was considering the elimination of rules regarding keeping license copies at transmitter sites, saying, “Licensing information is readily accessible online through the FCC’s databases,” and asserting that the rules regarding paper copies are “redundant and obsolete.”

← Nielsen names new CEO.
What to Do with the Mounting Facebook Problems →