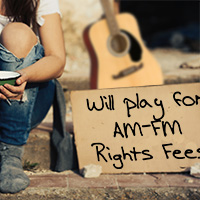 Poor woman begging for help on the street

The “Ask Musicians For Music Act”—a.k.a. the AM-FM Act—has been introduced in both chambers Congress. The measure would require radio stations to pay performers “fair market value” for music rights, with some exceptions for “small and noncommercial stations.”

According to Senator Marsha Blackburn, who introduced the bill in her chamber, “We should encourage… thriving talent and ensure the music community is properly compensated for their work.”

And Representative Jerrold Nadler, who sponsored the bill in the House, noted, “The United States is the outlier in the world for not requiring broadcast radio to pay an artist when playing their music, while requiring satellite and Internet radio to pay. This is unfair to both artists and music providers.”

Needless to say, the legislation has drawn support from the likes of the Recording Academy, the RIAA, and SoundExchange.

On our side, NAB president/CEO Gordon Smith said, “NAB opposes the AM-FM Act, which could decimate the economics of America’s hometown radio stations that have launched the careers of countless musicians and exposed legacy artists to a new generation of listeners.”

← FCC Notices benefit AM radio.
The 5 Most Powerful Sales Techniques →