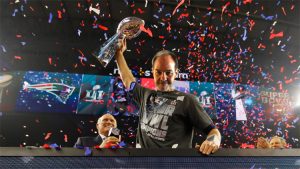 The base rate for a commercial in the Super Bowl is North of $5 million. The cost to produce an ad can easily top $1 million.

What do you get for your six mil? Pretty good reach—the U.S. audience for S.B. LII was about 104 million—but the frequency of 1 sucks. (The frequency is bolstered by subsequent airings, of course, but generally those airings are so distributed across time and ad space that effective frequency is not that impressive.)

But even if the schedule were bountiful and the investment reasonable, Super Bowl ads suffer from a fatal flaw: they’re too clever.

I conducted an informal survey among friends and family and found that roughly two thirds of the time, nobody could recall the name of the product or service being advertised.

Some time ago I was having lunch with Andy MacKenzie, Jeffrey Hedquist’s longtime producer, and we were talking about the number of Clio and other awards racked up by Hedquist Productions when another lunch companion asked, “Those awards are for the results the ads get, right?”

If only it were so.

PS: If the awards were in fact based on results, Hedquist would still be racking them up. But others, not so much.