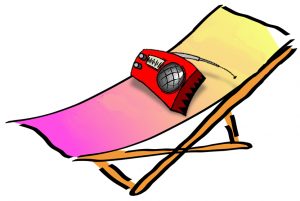 There’s the adrenaline of knowing that what you’re saying is going straight into your listeners’ ears: no filter, no second chances. Fluff a little, and you’ve got to just plough on regardless.

There’s a thrill—if you can do it—of off-air monitoring in your headphones: the effect of the Optimod on your voice, particularly the crackle and distortion of AM. After the microphone processor and the transmission chain, you sound awesome.

Live radio is almost like Russian Roulette. You’re never quite sure whether the caller is going to drop an f-bomb; whether you’re going to get the next segue ‘just right’; or whether the sports journos have slipped in Everton player Gylfi Sigurðsson for a laugh. It’s all seat-of-the-pants stuff.

A fluff here, a mis-pressed button there, a presenter break that could have been better if you’d had another go—it’s all just fine. It’s live radio. And, as we’re told, live radio is what makes radio great.

Do you truly believe that every time you open your mouth and talk, you get everything perfect? Every single time? Or could you benefit from a little post-production?

If you could have made that segue astonishingly good by pre-recording it and properly beat-matching the songs, for example, why didn’t you?

Would that dull interview with the man from the Council be made slightly better if you had pre-recorded it first, and edited out his ums and ers—and that crappy question you asked that didn’t really go anywhere?

Was your show enhanced with you saying “aaand the travel’s next!” just so you could hit the vocals, or could you have just slid the song back two seconds in playout?

Why is it that The Daily, for example, sounds so much better than your morning news program? Is it because it’s post-produced to make it sound great?

Why are you content to give your listener second-best?

Radio is all about being real and relevant to your audience. So, of course, I’m not encouraging you to voice-track shows more than 12 hours in advance—how can you know what’ll happen, or be able to judge the mood?

And to be clear, I’m wanting you to be in the studio while your show is on—because I do want you to be able to be live if you need to be.

But I’m also encouraging you to think about how much really needs to be live. If you had to justify every live element you wanted to do, what reasons would you give?

Listeners have so many choices these days. A slickly pre-produced program, or podcast, will always sound better than leaving it up to luck.

And, of course, if you pre-record segments, you can do other things with them on other platforms where live and linear is even less relevant than it is now.

But, as I hope I’ve demonstrated, live radio is lazy radio—at least, it can be. Does your audience deserve better?

← Imus has left the building. On his terms.
BFOA broadcasts hope. →