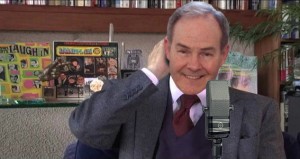 As a couple of the articles in this week’s newsletter will attest, we have found ourselves on that slippery slope known to the world as podcasting.

To wit: Since patent trolls are very much in the news nowadays—between our friends the Sheridan’s and their opportunistic legal actions over pre-1972 recordings and this week’s news of the company claiming to own the patents governing the publishing of music playlists online—we innocently published an article about that topic from my good friend Dr. Jay Douglas, which, it turns out, derived from a podcast that he does every week.

Then, we ran an article from Gordon Borrell discussing the topic of podcasting itself.

I have a confession to make, and it won’t be the first time I have copped to cluelessness: Until very recently, I completely misunderstood the place of podcasting in the media universe.

I have always had a problem with the integration of linear media (specifically, audio and video) with that distinctly nonlinear medium, the Internet. Why, I have postulated, will someone sit still for a medium that forces you to listen to a beginning, middle and end—sure, you can skip around, but it’s not the same—while the hosting medium allows you to choose at random among billions of pages of material, and an overabundance of choices within any one page?

Then my friend, social media expert Katie Wagner, confronted me with some interesting facts: YouTube—the reigning monarch of linearity—gets one billion-with-a-“B” views per day. And most of those views are to how-to videos.

Not only am I colossally wrong about linear media themselves, but I am especially wrong about the content: never in a million-with an-“M” years would I have thought that any number of people would sit through a how-to video when all they really want is step-by-step instructions to which they can refer back, to any point, at will. (That part still confounds me.)

For years, ever since the advent of blogging, podcasting has languished as a poor second cousin. But then it was discovered by people like broadcaster Adam Corolla, comedian Marc Maron, and pretty much the entire NPR stable, who were able to transfer their popularity and their following from one medium to another. In fact, while there are exceptions, most of the podcasts that have gained traction over the years have been hosted by people who have achieved popularity in other, more traditional, media.

Understanding that fact, entrepreneurial broadcasters like Norm Pattiz and Steve Goldstein left behind their cushy traditional-media jobs to take fliers at podcasting. Now, as Gordon Borrell’s article reveals, our man Norm has over 200 individual podcasts under his belt. Meanwhile, a bunch of other companies have entered the fray, leveraging their own strengths to acquire and promote podcasters.

Next time: Why most podcasts suck.