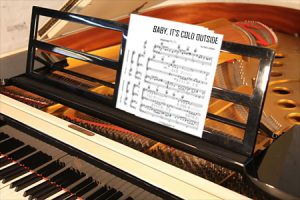 Boy, this is a tough one. What most media report as “several radio stations”—we only know of one, actually—banned the song “Baby, It’s Cold Outside” because of questionable lyric content spotlighted by the #MeToo movement. To some, the lyrics suggest that the man is acting as an aggressor; to others, the dialog is merely flirtatious banter between two consenting adults.

The song has been in the holiday-music catalog for decades on thousands of radio stations, amounting to millions of plays. And only this year has there been a problem.

Meanwhile, countless movies, plays, songs, television shows, and whatever other media I’m forgetting have featured questionable content when judged by the standards of today.

What complicates the issue is that, while the aforesaid countless media have been guilty of something by today’s standards, and can be forgiven their sins because they are historical works, “Baby, It’s Cold Outside” has been recorded and re-recorded well into an era where the lyrics in question should well be questioned. (Viewed in the context of everything that’s been happening, the 2014 Michael Bublé-Idina Menzel video, depicting the characters in the song as little kids, is unintendedly creepy.)

Meanwhile, an enterprising bunch has reimagined the classic for the #MeToo age. The Holderness Family released their version on YouTube, hitting 18 million views in just a few days, with lyrics like these:

“I’ve got to go away /
Understood—no means no”

What further complicates the issue, as it relates to the radio industry, is that the “banning” of the song by the handful of stations that have done so has been followed by an online vote, the results of which returned the song to active airplay.

So a discussion-worthy observation by the #MeToo contingent has morphed into a radio promotion.

I believe this issue deserves to be debated, but I’m not sure there is one, definitive, politically-correct point of view on this. As it is often the case, unfortunately, radio stations are calling the wrong kind of attention to the topic.

If it were me, depending on the format, and the size and composition of the market, I would either avoid the subject altogether (perhaps quietly dropping “Baby, It’s Cold Outside” from the playlist just to be on the safe side), or use my airwaves to promote an honest discussion.

← Apple and Amazon join forces.
One Less Star in the Radio Sky →