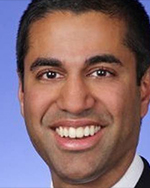 In a speech before the North American Broadcasters Association during its Future of Radio and Audio Symposium last week, FCC Chairman Ajit Pai called “the enduring popularity of radio” “truly striking.” After citing a venture capitalist’s prognostication that the future of digital media is dependent upon the convergence of social, local and mobile forces, Pai proceeded to proclaim that radio is social (“Radio is the original social medium”), local, and mobile. The Chairman, who initiated the AM Revitalization movement currently afoot at the Commission, told the assembly that regulations to allow AM stations greater flexibility in finding sites for FM translators will be voted on next (that is to say, this) week. Pai is also a big fan of FM chips in smartphones, saying, “I will keep speaking out about the benefits of activating FM chips.” But he stopped short of advocating a government mandate to that effect, saying, “I don’t believe the FCC has the power to issue a mandate like that, and more generally I believe it’s best to sort this issue out in the marketplace.” Editor’s $0.02: For the record, the first person to say that radio is the original social medium—actually, he said “interactive medium”—was former RAB CEO Gary Fries.