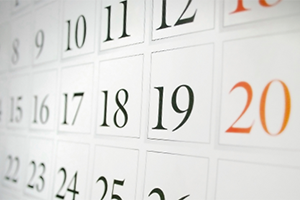 JANUARY: CHRISTMAS IN JANUARY. If you’re thinking about throwing a holiday party for your advertisers, why not make it a “Christmas in January” party, when you and they aren’t so busy?

JANUARY: GUILTY PLEASURES. Most people feel guilty about spending too much money and eating too much food during the holiday season. So in January it’s a good idea to target groups like weight-loss and smoke-ending programs, self-help books and tapes, and other such organizations and activities.

JANUARY: HALF PRICE CARNIVAL. Set up a special trade show to which each participating merchant brings only items to sell at 50% off list price. This is good for clothing and other soft-goods retailers in January—one of their slowest months.

JANUARY: ONE TON CLUB. Since losing weight is one of the most popular New Year’s resolutions, have your morning show recruit a group of listeners to pledge collectively to lose a ton—2,000 pounds—by March 31. This is a perfect tie-in for a local weight-loss center. Each week they check in and report, and the jock totals the pounds lost on the air. Everybody reaching the goal receives a certificate of merit for new clothes that fit the new body. If the group reaches the one-ton goal, throw a party catered by the sponsor, or give away trial memberships at a fitness center.

JANUARY: PHOTOGRAPHER’S SPECIAL. Suggest to a local portrait studio that they offer a special Valentine’s Day price for portraits—if the sitting takes place in January. This is promoted with a schedule on your station, of course!

JANUARY: SNOWBLOWER CONTEST. Work a deal with a local dealer for the use of a snowblower for a morning; say that only the motor will be used for an hour or so—the unit will show no signs of wear. When the forecast calls for a big snowfall overnight, pick up the snowblower. On the morning show, start the snowblower on the air and invite listeners to call and guess the exact time that the thing will run out of gas. The personality can do frequent “gas checks” throughout the show to prime the pump for more guesses (and the motor will be running in the background whenever the personality opens the mike). The closest guess wins a snow shovel, also donated by the dealer.

← Break up to make up.
Georgia Association of Broadcasters inducts SMRN reader. →