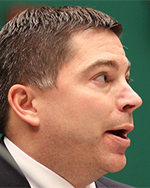 The United States Office of Special Counsel (OSC) has issued a warning to FCC Commissioner Michael Riley for running afoul of the Hatch Act for his endorsement of the president’s reelection during his appearance at the Conservative Political Action Conference (CPAC) last month. O’Rielly urged the CPAC crowd to “make sure that President Trump gets reelected,” after which an organization called the Project on Government Oversight complained to the OSC, an independent federal ethics watchdog agency. A letter from OSC representative Erica Hammick stated that because O’Rielly was appearing in his role as FCC Commissioner when he made his pro-Trump remarks, he violated the prohibition of the Hatch against “using his official authority or influence to affect an election.” The letter did fall short of actually describing the Commissioner’s remarks as an official violation of the Act. For his part, O’Rielly responded that his remarks were “off-the-cuff,” that he was “disappointed” with the OSC opinion, but that he took the warning “seriously.”