In 1922, a radio futurist looked ahead 50 years What could possibly go wrong?

Editor’s Preface: The book from which this piece came was written in 1922. I’ve annotated it with today’s version of the author’s vision.

In the illustration below are shown some of the future wonders of Radio. Several of the ideas are already in use, in an experimental way, and it should not be thought that the entire conception is fantastic. 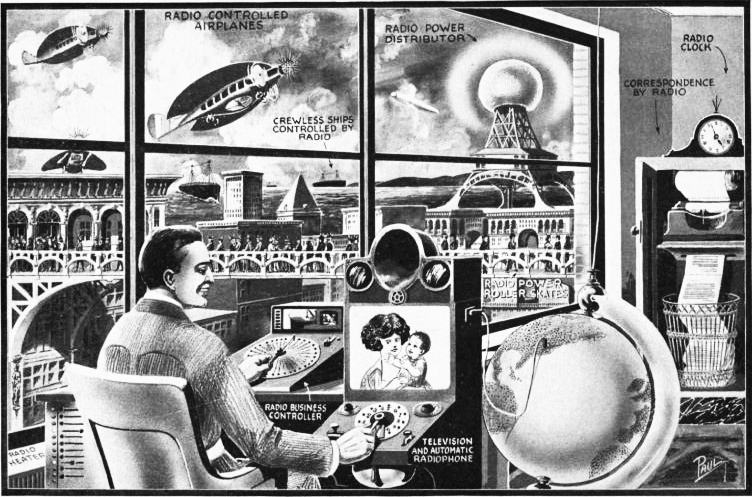 The illustration shows a business man, let us say, fifty years hence. To the right is a television1 and automatic radiophone. By means of the plug2 shown to the right of the machine, the man can plug in any city in the United States he desires; then, by means of this automatic control board,3 he can select any number in that city he wishes, merely by consulting his automatic telephone directory. As soon as he has obtained his number, a connection is made automatically and he not only can talk, but he can see the party whom he calls.4 At the top of the instrument is a loud-talker which projects the voices of the people, while on a ground-glass in front of him the distant party is made visible. This idea is already in use, experimentally.

Directly in front of the man, we see the “radio business control.” By means of another television scheme, right in back of the dial, the man, if he chooses to do so, can load and unload a steamer,5 all by radio telemechanics, or throw a distant switch, or if a storm comes up, look into the interior of his apartment and then, merely by pressing a key, pull down the windows;6 all of which can be accomplished by radio telemechanics, a science already well known.

His business correspondence comes in entirely by radio. There is a teleradio-typewriter.7 This electro-magnetic typewriter can be actuated by any one who chooses to do so. For instance, if we wish to write a letter to Jones & Company, Chicago, Illinois, we call up, by radio, that station, and tell the operator8 that we wish to write a letter to the Company. Once the connection is established, the letter is written in New York, let us say, on a typewriter, and automatically sent out through space by radio; letter for letter, word for word being written by the other typewriter in Chicago. The letter when finished falls into a basket. Instead of sending our correspondence by mail we shall then do our letter-writing by radio. There is nothing difficult about this scheme, and as a matter of fact, it can be put into use today, if so desired. We have all the instrumentalities ready.

Going further, we find the Radio Power Distributor Station that sends out power over a radius of 100 miles or more. This radio power may be used for lighting and other purposes.9

In front of the bridge we see a number of people who are propelled by Radio Power Roller Skates. On their heads we see curious three-pronged metallic affairs. These collect the radio power from a nearby railing, which, however, is not in view, and which they do not touch. The power is sent through space from the rail to the three-pronged affair and then is conveyed to the skates, which are operated by small electric motors. These roll at the rate of 15 to 20 miles an hour, and there is no visible connection between the wearer and the Radio Power Distributor.10

We next see the crewless ships controlled by radio. This has been made possible today. Indeed, several U. S. battleships have already been maneuvered over a considerable distance by radio.

The time will come when we can direct a ship across the ocean without a human being on board. Future freight will be sent in this manner. The ship, every ten minutes,11 gives its location by radio, so that the land dispatcher will know at any time where the ship is located. Collisions are avoided by a number of instruments into details of which we need not go here, but which have already been perfected. Collision with icebergs also is avoided by thermo-couples which divert the ship away from the iceberg as soon as it enters water which has been cooled below a certain degree.

It is a mistake to think that radio is only good for the distribution of intelligence.14 As the illustration shows, the great uses of radio have not been touched upon as yet.15

Hugo Gernsback (1887-1964) was the founding editor of Radio News (originally Radio Amateur News), published from 1920 to 1972, by all accounts the most influential publication about the medium in its early days. This article is from Radio For All, published in 1922 (courtesy of the University of California/Los Angeles via The Internet Archive, with special thanks to James Cridland).

I love stuff like this. Mr. Gernsback was remarkably prescient—but he was premature by about 45 years. I’ve taken the liberty of reimagining his illustration to show how close he was by today’s standards: 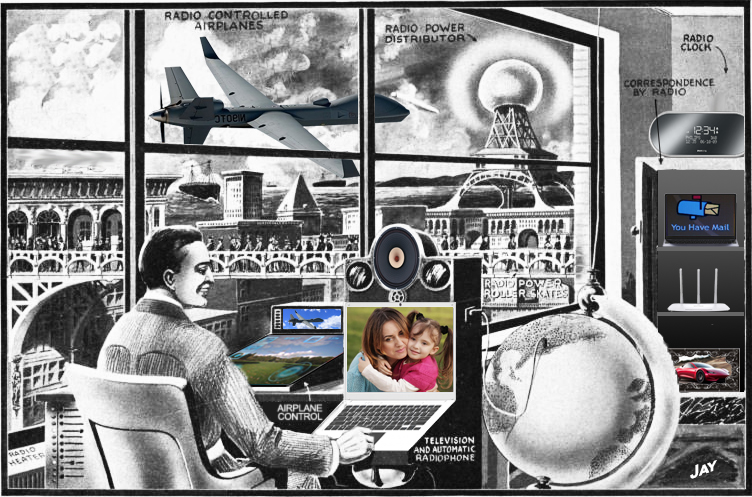 In 1922 no one, not even as accurate a forecaster as Mr. Gernsback, could have predicted the Internet (or, more to the point, the Internet of Things [IOT]), which has supplanted radio as the ghost in the machine.

If we define radio as “wireless transmission,” our medium is integral to most, if not all, of Mr. Gernsback’s prognostications.

Mr. Gernsback lived long enough to witness the birth of ARPANET, the first stirrings of the Internet. . .but not long enough to see the application of wireless technology (a.k.a. WiFi), which brought his nearly-century-old predictions full circle. Nonetheless, toward the end of his life, I’ll bet he still foresaw radio in the mix. And by then it was boss.

Nostradamus had nothing on this guy.