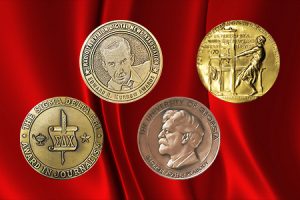 This week a bunch of journalistic organizations announced a flurry of awards for excellence; sadly, very few commercial radio stations were included, and those that were are in what we would call medium markets (Des Moines, Wilmington, Buffalo, etc.) that begs the question, Can small market stations effectively vy for such awards? Should we bother?

I am talking to more and more stations these days who are renewing their commitment to local news. Instead of one so-called news director—I say “so-called” because, really, there is little to direct—holding it down for multiple stations, a lot of stations and groups are hiring a second news person full time, and/or building a network of reliable stringers..

I want to circle back for a moment and praise the dedicated one-person news departments who work very hard every day to present in-depth Global reporting. I’m not talking about the folks who rewrite the newspaper copy; I am talking about real journalists who develop and work contacts in all sectors of their local communities, and are rewarded for their close relationships with those contacts with frequent scoops.

Everyone is talking about the way that journalism is very much under attack his days from the highest quarters. The dangerous phrases “fake news” and “enemy of the people” are being repeated, over and over—repeated often enough that the sobriquets overwhelm the reality. And on the national stage, more and more partisanship is creeping into the conversations, enough so that those who believe in the concepts of “fake news” can mount a convincing argument. In our small radio markets, on the other hand, from what I’ve been able to observe, the news we present is respected and relied upon.

We may not win a bunch of journalism awards—that requires (a) an event of some significance happening in our community, and (b) that we submit an entry —. but we are worthy. We can and should be proud of the real journalism that we practice every day.