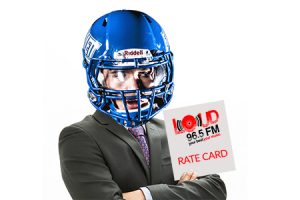 We also broadcast all of the Class C football and basketball games that fit into our schedule. Those games are on a separate contract.

You can hear our games over our web site, www.kdbm-kbev.com. There is a “Game Audio” button on the front page that allows the listener to hear the games. We can stream two games at a time. The games are stored on the site for a couple of weeks. We get emails from all over the nation, plus some foreign countries, telling us they heard the games. —Jo Ann Juliano

SOMETHING THAT HELPS MAKE RADIO SPORTS SPONSORSHIP MORE TANGIBLE for the sponsors is to have them record the promos instead of the announcer. Short, simple liners like, “I’m Jim Smith, owner of Smith’s Pharmacy in Sturgeon Bay inviting you to listen to Sturgeon Bay High School Boys basketball this Friday at 7:30 p.m. on 96.7FM WBDK, proudly sponsored by Smith’s Pharmacy.”

Two high school teams and one “County Schedule” are sold to a sports guy who pays us a flat fee (profitable) for each game broadcast. One college basketball schedule is also sold to the school that pays a flat (profitable) rate. All we do is offer the air time and assign a board operator. One check comes each month, without asking, for the high school broadcasts and one check for the whole season from the college. No billing, no affidavits, no traffic—no work, really.

We do a schedule of a girls team, and the boosters bring a check for the whole season prior to the start of the season. Little league baseball games are scheduled weekends prior to or just after St. Louis Cardinals broadcasts on one of our Cardinals stations. The leagues are given a list of dates and times available and are required to deliver a certain number of sponsors or viable leads and we sign and bill them. Most of our stations follow one or two high schools, but one of our sports stations picks and chooses from six to eight high schools (all without regular coverage) from a much larger community in the coverage area. Games are sold separately with a few corporate sponsors that take them all. That station does two half hour coach’s shows from the eight schools we cover scheduled each evening Monday-Thursday during sports season with a Friday night local preview show. Each show has separate sponsors.

All of the games on air are online, but a few are online only. This year we have begun sponsorship of a high school audio and video extracurricular club and will do webcasts including audio and video of some home JV games (with students handling all facets) and then switch to the air feed with regular announcers for the varsity games. The biggest problem with online video is bandwidth available (even from the school).

We work hard to get games of interest that aren’t broadcast on a local radio signal, but are broadcast by another of our stations on more than one of our station web sites. A station might be carrying one local high school on air and online, but another local school might also be available on the first station’s web site by putting a link to the other station’s online feed.

It’s a work in progress and we will probably move to a combined sports stream page for our own games, much like Network1 Sports (which we use some). Our web people are pretty much non-sports fans so it requires direction from management right now.

Most are sold by school or sport, but there are discounts for multiple commitments. We have begun to steer away from plans budget billed year round because of coop billing problems—no ads in July, for example—and the complaints about paying for “nothing in the summer.”

We meet with athletic directors and get help with leads for sponsors. Many of the broadcasts feature contests for listeners during the broadcasts and some have school centered contests throughout the week. A few stations do football tailgates, especially when two of our high school teams are playing each other.

We do not brand our coverage the same across the group, but do offer a combined “TOC Sports Ticker” using Twitter; our board operators send a tweet each time a team scores in football, and after each quarter for basketball, since our stations are really pretty close together.

There are fifteen stations and twenty transmitters in the group. Every one of them does locally originated sports broadcasts. —Mark Lange

WE CARRY THE GAMES OF OUR TWO COUNTY HIGH SCHOOLS. We alternate the games we broadcast and try to keep the number even between the schools in football, boys and girls basketball, and in baseball; we do some key season games and post-season. We seldom tape-delay unless both teams are in big tournament action at same time.

We have been a Cincinnati Reds affiliate since 1967 and carry University of Kentucky football and basketball, so it’s a full schedule. We sell these in a “Sports Club” form with a sponsor taking the entire season of East, West, U.K. or they can split spots between the high schools. Packages offer a set equal billing amount over a seven-month schedule based on from two :30 spots per game, up to six per game. A total sports package carrying everything including Reds is also offered with a 12-month billing.

We also broadcast Kentucky Christian University, with the complete football schedule and selected men’s and women’s basketball games through that season, post-season with again as a sports club package. We stream all local games on our website and promote schedules on the web, on daily sportscasts and in printed schedules.

The high school sports club takes sponsors through the district tournament with their team, but then we carry every game of the regional boys and girls tourney. This we sell separately. The season packages include naming rights on the broadcast table, pre- and post-game coaches shows, halftime show, and stat of the game and starting line-ups.

During post season , we get a little more “crazy” and offer naming rights to the three point line, the foul line, the officials (to an Optometrist), position arrow and rebound
garbage buckets (to the Sanitation Dept) since there are rights fees to pay for those tourneys!

We always go on 25 minutes prior to tip-off with pre-game to catch people who may be coming to the game, and a 20-minute post-game with coaches for those heading home. We have a tremendous relationship with our schools, and while we pay no rights fees, we help sponsor their preview tourneys each year, buy ads in programs and help with about anything they ask in promoting their programs.

We also run the local community Cable TV station and play back video of key games with tapes supplied by the school. The home college games are broadcast live on iHigh.com using our audio. —Francis Nash