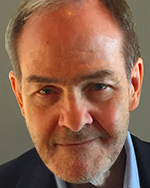 Jay Mitchell is a second-generation radio broadcaster who began his career as a copywriter at his dad’s radio station at the age of 12. At 14 he was selling Muzak; at 16, after becoming one of the youngest ever to obtain an FCC First Class License, he hosted a nighttime Top 40 radio show while still in high school.

At 23 Jay was the general manager of a top ten-market radio station and the national program director of its parent company. He owned a radio group in Southeast Iowa; and as a consultant, he has worked with great radio stations large and small — from Los Angeles, CA to Hot Springs, SD.

He makes his home in Southern California with his wife, Sharon, and their discount designer dog, Issa.