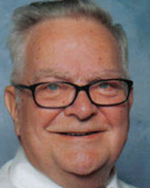 Bob Doll (1933-2010) started as a gofer for a radio station in his hometown of Cincinnati. He became a part-time announcer at WNOP in Newport, KY; went full time at WDLB in Marshfield, WI; then returned to Ohio at WCSI in Columbus.

Originally, Bob had his sights set on becoming a large-market personality, but he fell in love with small-town living, and he moved to WKY in Richmond, KY, where he ultimately became the manager. He went on to manage other stations and a radio group before buying his first stations in Otsego, WI.

So after Bob sold his Otsego stations, he and wife Barb took off and spent two months driving around the country, taking mostly back roads. Whenever he saw a tower he stopped in to visit the station, talking up his newsletter venture.

After reading everything he could find on the subject, Bob and Barb launched the Small Market Radio Newsletter in 1983.

Bob and Barb published the newsletter for ten years, first from Otsego and then from San Antonio, TX. In 1993 he sold SMRN to Jay Mitchell.

Bob continued to serve the industry he loved for the rest of his life, consulting small market stations and publishing three books.

For a profile Jay did of him shortly after the newsletter changed hands, Bob said, “I’ve done what I wanted to do, and I’ve done better than I thought I would do. Nobody ever said it would be super easy, but the pay’s pretty good for something that is so much fun.”