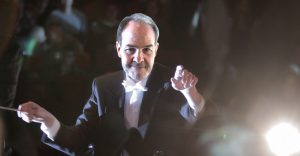 I don’t know about you, but I think noncommercial radio is a thorn in our side. In Southeast Iowa, we had a very popular local public radio station that siphoned significant dollars and, although I can’t prove it with ratings in our small market, significant audience as well.

On the other hand, practically speaking, they served as a great farm team from which we were able to grab many talented and hard-working employees.

And although I would have been loathe to admit it at the time, that local public radio station contributed greatly to the cultural life of our community.

Early in our marriage, I bought a sculpture. My wife objected to the purchase, calling it frivolous. I argued at the time that without an occasional frivolous exercise, life would be diminished. (It’s funny how redecorating the house and redoing the kitchen, both aesthetic exercises in large part, do not fall under the definition of “frivolous.”)

In retrospect, that sculpture wasn’t very good—it didn’t rise to the level of mallard bookends by any stretch—but our occasional dabbles into various works of art over the years have upheld my initial argument.

The same thing applies on a national level: without the occasional “frivolity”—a Calder mobile here, an artisan park bench there, and the ability to view and listen to the kind of entertainment that you don’t get on ratings-driven media—we become a sad and soulless nation.

My dentist and his wife grew up in Eastern Europe, the very definition of “sad and soulless.” As the good doctor once told me about his former life, “If you’re walking down the street and you see a line, you get in it—even though you don’t know what it’s for.” And yet, the governments of such sad and soulless countries place a premium on culture, with state-sponsored programs to encourage the talents of young prodigies.

To be sure, the assault on public broadcasting is a small part of the small part of our budget deemed unnecessary and wasteful in being spent on all manner of cultural pursuits. (I think we’re talking about less than 2% all in.) In fact, the act of slashing these funds really amounts more to a statement of opinion about the importance of culture in our society than it does provide a significant savings.

I think that those of us who make a living in the entertainment industry, commercially-driven though we are, need to speak out about the importance of keeping all types of cultural pursuits alive and well, whether it be music in our schools or the local concert association—or, yes, those pesky public radio and television stations.

We broadcasters have a powerful voice, and there is much to be said right now. For the good of our communities and our country, I hope you say it.